I Remember Haverhill
By Lina Rehal
While growing up in the early 1950s to the mid 1960s, I spent a lot of time in my father’s hometown of Haverhill, Massachusetts. Located about 32 miles north of Boston in the northeastern part of the state, it is a city rich in history. The shoe industry put Haverhill on the map. By the early 1900s, it was known as the “Queen Shoe City of the World.”

A lot of famous people came from, or were associated with Haverhill. John Greenleaf Whittier, poet and abolitionist, was born there in 1807. Rowland Hussey Macy opened the first Macy’s Department Store on Merrimack Street in 1851. Another person who started out in Haverhill was Louis B. Mayer of Metro-Goldwyn-Mayor (MGM) Studios. He purchased the old Gem Theatre in 1907 and later became one of the giants in the film industry. My favorite Haverhill “claim to fame” is Bob Montana, creator of the “Archie Comic Strip.” Graduating from Haverhill High School in 1939, he later turned HHS into Riverdale High and one of the most loved comic strips in America.

When I look back at the days of my youth, I think of Haverhill and fondly recall places such as downtown, the playground at the Tilton School, Haverhill High on Main Street, the Thinker, the John Greenleaf Whittier School that I went to in the eighth grade, and the bell that hung in the square and how pretty it looked during the Christmas season.

My grandparents, Lena and Andrew Paciulli, owned a big white, three-story house at the top of Washington Street. All who walked by admired my Grandfather’s beautiful gardens. He knew just about everyone in town and loved it when people stopped by and talked for a while. Many a night I stood next to him by the gate that had his name on it in big silver letters. I remember the afternoons we spent together mowing the lawn and watering the flowers.

The house was a stone’s throw from Peever’s Drug Store, where for ten cents, you could buy a Hoodsie with a picture of a movie star on the inside of the cover. I made hundreds of trips to Peever’s when I was a child. I can still picture the soda fountain there and almost smell the pleasant aroma from the mixture of vanilla ice cream and chocolate syrup. Sitting on a high swivel stool and leaning on the cool marble counter, I would hand my dime to Mr. or Mrs. Peever. What a delight it was to sit and have an ice cream soda or a cold drink.

Shopping was different then. There were no malls. We went “downtown.” My Grandmother loved taking me there. It was one long street with department stores, such as Mitchell’s and Park Snow, the five and dimes we hear about today with lunch counters, restaurants, and huge movie theaters where patrons could watch double features. Those wonderful excursions were my first shopping experiences.

Barely a trip to Haverhill went by that I didn’t pester my Aunt Norma to take me to Skateland or to the movies. I will never forget roller-skating for hours on those old uneven wooden floors to the melodious sound of organ music. That was my idea of a great afternoon!

A big event in those carefree days was a trip to Salisbury Beach. My Aunt Dolly would take us there and we would spend the entire day at the seashore. I liked the beach but there was nothing like the Center, with its rides, games, and cotton candy. For my fourteenth birthday, my Father took me to the Frolics nightclub on Salisbury Beach to see my teenage idol, Paul Anka. I still remember that magical night as if it were last week.

My family lived in Haverhill between 1960 and 1962. Our stately red brick house at 940 Main Street was one of the oldest homes in the city at that time. I spent my summers hanging out at the Smiley School playground playing softball and taking walks with my friends to Wasmacco’s Ice Cream stand.

Being a teenager in Haverhill in the early 1960s meant going to Haverhill High School on Main Street in the days of the two-platoon system. Since there wasn’t enough room for all the students to attend classes at the same time, the juniors and seniors went in the morning session and the freshmen and sophomores in the afternoon.

I loved going to school in the afternoon! My girlfriend and I would often take an early bus from in front of my house to downtown. Even as a teenager, I loved to go shopping. Sometimes we went bowling before school. We spent countless hours in the record section of Mitchell’s Department store. (By record, I mean 45 rpm’s.) There were no CD’s or DVD’s. We listened to our music on vinyl, not floppy disks. I must have spent most of my weekly allowance in that store.

We went to football games at Haverhill Stadium, borrowed books from the Public Library, and went to dances at the Y.M.C.A. and Sacred Heart Church.

That lovely old brick house on upper Main Street is gone now, replaced by Route 495 long ago. The memories of it remain with me still.  ​​ 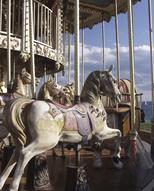