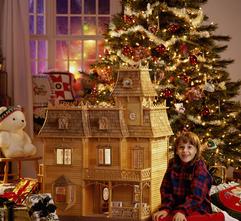 In one of themost famous Christmas stories ever, “the stockings were hung by the chimney with care.” In our home, they were scotch taped to the mantle of a fireplace made out of cardboard.

​The real excitement of the holiday season, for our family, began every year when we headed to the Elks to pick out the best Christmas tree in the lot. After careful consideration, we all agreed on one that was so big, it hung out of the back of my Country Squire. I knew I would be sweeping pine needles out of my car well into the summer.

​We had to let it stand for a while so the branches could all fall into place. The waiting was difficult. The children wanted to get straight to the decorating. They helped me lug the boxes of cherished decorations up from the cellar, arguing the whole time over who was going to place what on the tree.

"You can't reach high enough to put the star on the top."

"You make a mess with the tinsel."

​First, we had to get the tree into the stand. Since it was too tall for the room, some minor adjustments had to be made. The children watched their father cut about a foot and a half off the top. Then he had to cut a piece off the bottom. Once that was done, I had to hold the tree straight while he crammed it into the stand and twisted the screws that held it in place.

"How can I tell if it's straight when I'm standing next to it?"

The tree was finally standing and everyone was happy that part was over. Then came the lights. The three or fours sets of beautiful lights that were so carefully wound and placed back in the boxes last year had somehow turned into tangled masses of green wires wrapped around hundreds of multi-colored bulbs. How could this have happened and why was it my fault?

"What did you do to these lights?"

"You're the one who put them away last year. Get over here and help me unravel them."

Biting my tongue, I helped unwind the mess until we had four sets of untangled lights spread out across the carpet. The trick was to remember to plug them in BEFORE placing them on the tree to make sure all the bulbs worked. They never did.

​I scurried around looking for the extra bulbs I had bought, just in case. Our person in charge of lighting replaced the burned out ones, cursing with every one that didn't work and every new bulb that was a dud. My kids grew up thinking that Christmas lights started with an "F".

When the lights seemed to all be in working order, he plugged each string into the next and began strategically wrapping them around the tree and attaching them to the branches. The kids had left the room by then. He plugged the star into a set of lights and placed it on top. Getting the lights on was his job and it had to be done just right. I was happy they lit up.

​Once the light fiasco was over, their dad retreated to the den. His part was done. The kids came back into the room to decorate the tree. I took care of the higher spots that the children couldn't reach and filled the stand with water. They did the rest.

"I want to put the little angel on."

"No. I'm gonna put the little angel on."

"Mama said I could do it this year."

"Children, Santa can hear you."

​Before long, the trinkets we had collected over the years were on the tree. Tiny green needles were everywhere. The dusty boxes, retrieved from the basement only a few hours ago, were strewn about the living room. The wonderful scent of pine filled the house. It looked and smelled like Christmas.

We stood looking at our beautiful Christmas tree: a work of art created by the whole family working together, enjoying the peace and harmony of the holiday season.

We sang about it. "How lovely are thy branches." And they were lovely. Once the hand-made ornaments, heirlooms and read and green paper garland were finally in place, the star was on the top and that last piece of tinsel was carefully hung on the only bare branch that was left, we could step back and admire our tree.

​I watched the children. Their sweet little faces all smiles and happy that their tree was finally up. I watched their father. Also smiling and happy the damn thing was up so he could pour himself a Jack on the rocks and go watch television. I scolded the dog for drinking out of the stand and went to the the vacuum cleaner.

The joy of the season had officially begun.