The first time he came into Maxine’s, he sat alone at a small corner table close to the bar. He was in his early thirties, just less than six feet tall, a little on the thin side although he looked like he worked out on a regular basis. He was wearing black jeans, sneakers, and a navy blue tee shirt. With his dark wavy hair and charismatic smile, he would have been impossible not to notice no matter how hard he tried to blend in.

The tables in the dining room were almost full with customers who were there for the evening entertainment. A few seats were left at the bar. Sunday night was beginning to jump. One cocktail waitress had called out sick. Only two of us were left to handle the whole house. I knew I’d have to hustle. On Saturdays I could make decent tips, but Sunday was Karaoke night. Most of the crowd went there to sing, not drink. Since the mystery man arrived shortly before the end of the first round of singers. I wasn’t sure which category of customers he fell into. I hoped it was the latter as I headed toward him.

He was watching a middle-aged woman who was on stage. She was singing ‘I Will Survive,’ a popular number I heard at least once a week back then. Four of her rowdy friends sang from their seats. He seemed amused. I was thankful they weren’t in my section.

“I’ll have a Bud Light,” he answered.

When I returned a few minutes later, I found him thumbing through a songbook. He was there for Karaoke. My image of him was shattered along with my hope for a big tip. He closed the book and pushed it aside to make room for his beer. I slid a cocktail napkin in front of him and carefully set down the familiar brown bottle.

“Planning to sing for us?” I asked.

“I don’t know. Maybe,” he said, flashing me an innocent smile. He looked a little embarrassed.

He paid for the drink and gave me a generous tip. Surprised, I thanked him, wished him luck and moved along to my next table. He seemed so quiet and reserved. I couldn’t help wondering what he was going to sing. He didn’t strike me as a guy who would get up and make a spectacle of himself. Not that they were paying close attention to the singers. Most were too busy talking, looking at the books, and figuring out what they were going to sing to care about the person on stage.

I wasn’t a big fan of Karaoke; however, the host, Rick Dawson, owned the business and was a talented singer. He had a great sound system that Karaoke junkies liked. His equipment was state-of-the-art. He had been around a long time and took pride in his shows. Rick dressed impeccably and always worked with a female co-host. That night, he had a new girl with him. Alicia was a tall thin blond with an incredible voice. They were both excellent performers, worked well together, and knew how to please their audience. His following of exceptional singers from all walks of life included teachers, bankers, accountants, machinists, secretaries, hairdressers, lawyers, and even a Superior Court judge.

The second round began with Rick singing his signature song, ‘My Way.’ Alicia followed him with Whitney Houston’s ‘I Will Always Love You.’ After that, everything became a blur to me as I scurried from table to table and tried to keep my thirsty
patrons satisfied.

“Oh, Miss,” they yelled above the music. “Can we have another round over here?”

“Could I have a cup of coffee, when you get a minute, please?”

“Two Diet Cokes and a ginger ale for us, Miss.”

“Waitress, did you forget my beer?”

They had me hopping. I brought another Bud Light to my mysterious customer in the corner. He was still browsing through the book, and again tipped me well. I commented that I had not yet heard him sing. I thought maybe he changed his mind or needed more beer before he could get up enough nerve. He gave me that same smile. I walked away curious but too tired and busy to give it more thought.

As the round progressed, I paid little attention to the performers. Most of them showed up at Maxine’s every Sunday night. Grace, a sweet older woman with a lovely voice, sang ‘My Heart Will Go On’ from the Titanic. Richard, another regular and Maxine’s resident country singer, belted out ‘Friends In Low Places.’ The audience loved him, even if they didn’t like country.

On my way back to the bar, I heard Rick call up someone named Johnny to sing. I didn’t see him rise from his seat in the corner and walk up to the stage. Joelle, the other waitress, walked by and nudged me.

“Johnny?” I asked, having no idea who she meant.

When I turned around, I saw my customer standing in the middle of the stage with both hands wrapped around the remote microphone. He jumped off the small square platform onto the parquet floor, twisting and gyrating his hips as the music to Y.M.C.A. boomed out of the speakers. He began to sing. His energy snapped the crowd to attention. They loved him! The audience threw their arms in the air spelling out each letter as they sang with him. “Y-M-C-A. It’s fun to be at the Y-M-C-A.” The women clapped, screamed, and danced around the tables. Rick and Alicia stood on the sidelines, amazed at what they saw.

When it was over, girls were yelling, “Go Johnny.” Some women whistled as he left the stage. Rick thanked him and tried to quiet everyone down. I felt sorry for whoever had to follow that act.

“And I thought he was a typical Karaoke singer,” I said to Joelle. “Instead, he turns out to be Johnny, the unbelievable. Have you ever seen anything like that?”

“Yes. Be careful of him,” she warned. “Guys like him are dangerous.”

“Johnny, dangerous? I doubt it,” I said, laughing.

“Mark my words,” she said. “That man reeks of danger.”

One song and he was gone. He left without returning to his table.

Johnny came back to Maxine’s the next week and many times after that. Once in a while, he showed up with friends, but most of the time he came alone. Johnny wasn’t the best Karaoke singer around, but he quickly became the most popular. His smile and energy were infectious. As his repertoire of songs grew, so did his fan club. He stopped sitting alone in the corner as his popularity increased. People liked him and wanted to be around him. On our nights off, Joelle and I started going to other places where he sang just to watch him perform. We became Karaoke groupies. All anyone knew
about him was that he sang Karaoke at least three or four nights a week in local restaurants, clubs and bars. He kept his private life private. Everyone called him Johnny. Everyone, except Joelle and me, that is. To us, he was Johnny Danger.

Joelle and I followed him from club to club for almost two years. We got swept up in the Karaoke fever and the allure of a young man we knew nothing about. He was like the Pied Piper of Karaoke. His circle of so called friends was bonded together by one common thread. We were drawn into the group and readily accepted. Mesmerized by the atmosphere we found so exciting and wanting to be more a part of it, Joelle and I started singing. We loved every minute of it and reveled in
the attention. Soon, some of our own friends came to cheer us on and the Johnny Danger fan club grew.

One night Johnny didn’t show up at one of his usual haunts. Joelle and I didn’t think anything of it at the time. After all, he could have been sick or on vacation. None of us knew what he did for a living, but it was possible that he was away on business.

The following Sunday, Johnny wasn’t at Maxine’s either. He had not been seen anywhere on the Karaoke circuit in over a week. It seemed odd, but not alarming. Two more weeks went by; soon it had been a month since any of us had seen him. Upset by rumors about his mysterious disappearance, Joelle and I stopped going to the other clubs. Sunday nights at Maxine’s weren’t the same anymore. We all missed him.

“Do you think something happened to our Johnny Danger?” I asked Joelle one night. “Or, do you think maybe he just lost interest in singing?”

“I don’t know, Sara,” she answered. “He was a strange one right from the start. I told you that.”

“That’s true,” I said. “I hope he just got tired of it. Maybe he moved away or got a job working nights.”

“Maybe he didn’t even have a job and he found one,” she said, shrugging her shoulders.

I refused to believe any of the stories that were going around: that he was an undercover cop, involved in something shady, murdered, died in his sleep, committed suicide, was homeless. Some said he was discovered and went to Vegas. Joelle thought he was probably married, his wife found out about his Karaoke life and put a stop to it. I chose to believe that explanation, as it seemed to be the lesser of many evils.

It’s been several years since Johnny stopped coming around. None of us ever saw or heard from him again. I really believe he’s somewhere out there still singing his heart out.

Tell Me A Story 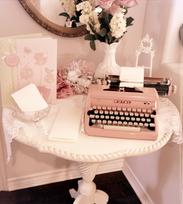